His Worship Interviewed by Area

Our neighbours in Spain were keen to feature the new Mayor of Gibraltar and learn about the initiatives and projects which will feature in his tenure. Topics included the ‘We Are One’ campaign promoting inclusivity and diversity as well as the opening of the City Hall to all who wish to visit, in order to make it a prominent cultural hub where every Gibraltarian feels at home. 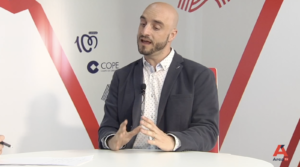