The Passing of Her Majesty Queen Elizabeth II

His Worship the Mayor, Mr Christian Santos GMD wrote a statement as follows:

I, along with all of the people of Gibraltar, am deeply saddened to hear of the passing of Her Majesty the Queen.

Queen Elizabeth II has been a constant figurehead to Gibraltar throughout her reign. Only this past June we had the privilege of marking her Platinum Jubilee. This was done with an overwhelming sense of community and joy, with our people taking to the streets to celebrate this landmark milestone with immense pride.

Over more than 70 years on the throne she has seen war time and peace, and unbelievable changes in society and technology. Through it all she has worn her crown with a dignity that has become synonymous with her name.

Gibraltar has always held Her Majesty in such high regard and been so proud to call her our monarch and Queen.

On behalf of the people of Gibraltar, I wish to offer my most sincere condolences. We will mourn the passing of this formidable woman with the most utmost respect.

His Worship the Mayor, Mr Christian Santos GMD signed the book of condolence at The Convent for Her Majesty Queen Elizabeth as the Civic representative of the people of Gibraltar, forever her loyal and loving subjects. May she rest in peace. 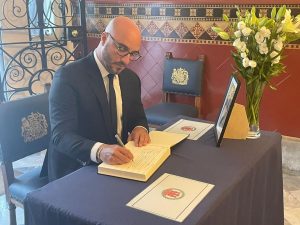 His Worship the Mayor, Mr Christian Santos GMD was invited to form part of the momentous occasion of the Proclamation Ceremony of His Majesty the King, Charles III, in Gibraltar.

The Ceremony took place on the Balcony of the Convent hosted by His Excellency the Governor, Vice Admiral Sir David Steele, with The Chief Minister, The Hon Fabian Picardo and Mrs Picardo in attendance. 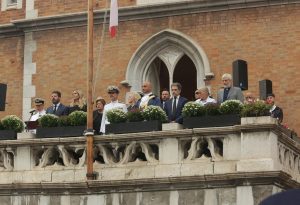