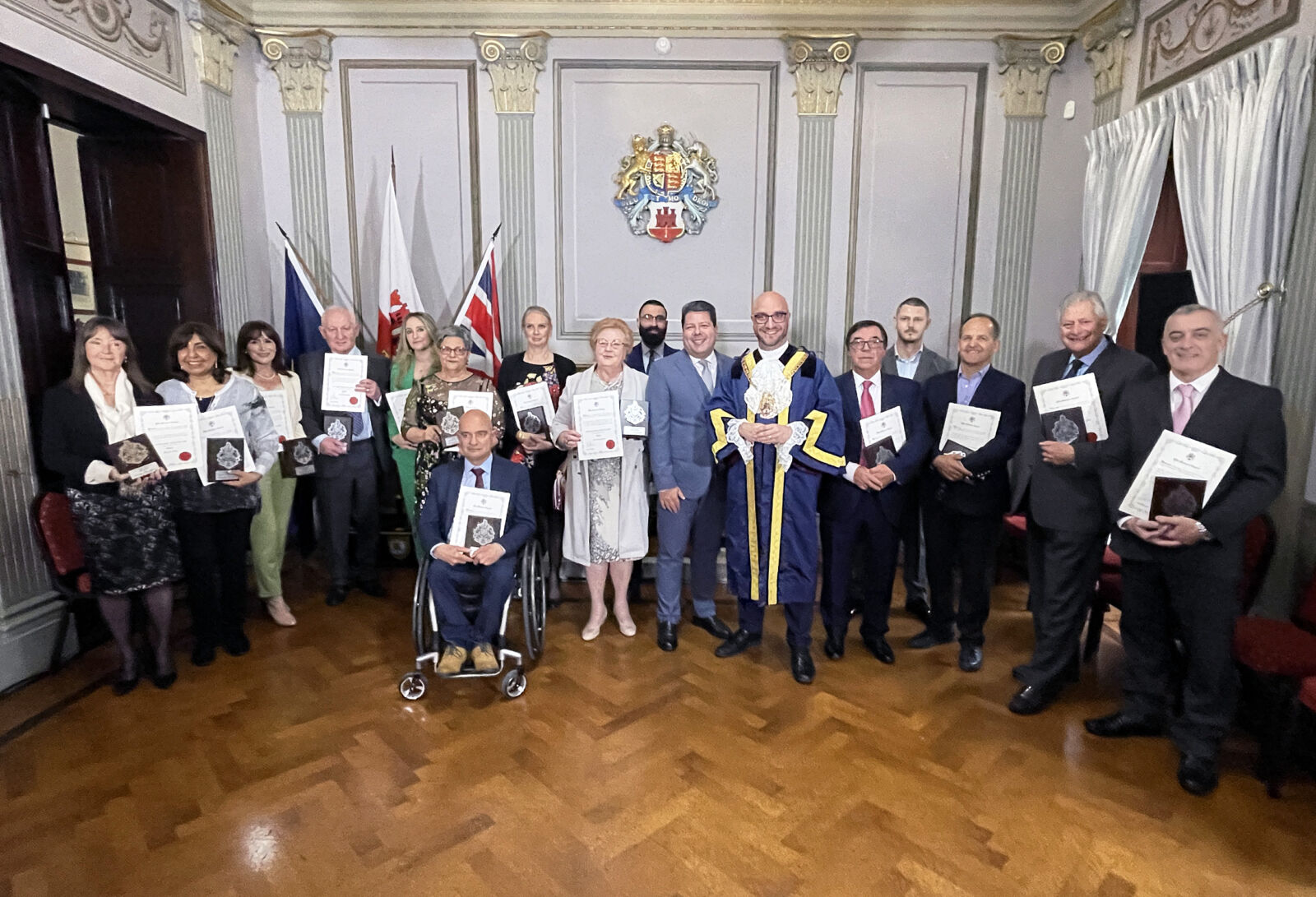 The annual Mayor’s Awards Ceremony was held on 5th April 2022. The Chief Minister, The Hon Fabian Picardo QC MP attended the Ceremony held at the Mayor’s Parlour in City Hall.

Following nominations from members of the public and endorsed by the Awards Board, His Worship the Mayor, Mr Christian Santos GMD, conferred fifteen Mayor’s Award as follows:

For his speedy and effective actions which saved a member of the public from drowning on 27th December 2021 at Queensway Quay, Mayor’s Award to Mr Nicholas Peliza For his brave and selfless actions, performing CPR on a gentleman on 13th October 2021 in the area of Waterport Road, saving his life, Mayor’s Award to Mr Giovanni Rodriguez For his brilliant record of ongoing commitment and dedications to our community, spanning a period of fifty-five years of voluntary service, Mayor’s Award to Mr Robert Balban For her voluntary counselling work undertaken over the years, and her unconditional support of the local community, Mayor’s Award to Mrs Dunia Bautista For his years of campaigning and raising awareness of disability issues in Gibraltar, consulting with and advising various organisations on these issues and seeing projects on accessibility through to fruition, Mayor’s Award to Mr Eric Rowbottom For her enduring charity work, setting up of the Integral Yoga Centre, and her service to the community, Mayor’s Award to Nalanie Harilela Chellaram For her voluntary work at the Geriatric Ward at St Bernard’s Hospital, Mayor’s Award to Mrs Lilian Shaw For her extraordinary passion and commitment to helping families in need, and expertly coordinating a network of volunteers to ensure help and support are given, Mayor’s Award to Ms Nicole Jones For her indefatigable work in raising awareness and funds for charity, and organising numerous charity events to assist local families and individuals in need, Mayor’s Award to Miss Jayne Wink For his dedication and tireless work with charity Action4Schools-Sierra Leone, building water wells and refurbishing schools, and for educating and involving our community in his vision, Mayor’s Award to Mr James Bruzon For improving the lives of street cats and helping to create a cleaner safer environment in our community, Mayor’s Award to Save Gibraltar Street Cats For their philanthropic work over the years, their support benefitting several sectors of the community, Mayor’s Award to The Parasol Foundation Trust For their sterling work supporting a number of worthy causes, and their philanthropic work, Mayor’s Award to The Peter J Isola Foundation For providing a ‘home from home’ for Gibraltarians in their time of need over the last 30 years. For the dedication, empathy and kindness of its staff to patients and relatives, making practical arrangements and offering support, Mayor’s Award to Calpe House GA This year the Mayor’s Office received over 70 nominations, a record number. His Worship was honoured to present the Award to such deserving individuals and organisations, who he felt had gone above and beyond in so many different areas. It was His Worship’s privilege to meet the recipients and their guests in a ceremony which focused on the good people do in our community