A Brief History of the City Hall

It was 1813 when Aaron Cardozo, a wealthy and influential Gibraltarian merchant, was finally granted the site to build a house in the present John Mackintosh Square. He had been fighting officialdom for 20 years, always receiving evasive answers, but in the end he won the day.

This favour was long due to him, because for many years, he had been a friend of Nelson, sailing to obtain supplies for the admiral’s fleet. It is reputed that Nelson was so grateful for his help that his parting words were “if I survive, Cardozo, you shall no longer remain in this dark corner of the world”.

Cardozo had to leave Gibraltar due to ill health, and when he died, his heirs, after renting the property to the Club House Hotel, sold it to Pablo Antonio Larios, a wealthy Gibraltarian merchant of Spanish descent. Larios spent a fortune improving and re-decorating the property, to the extent of installing bathrooms with hot and cold running water in 1875! The fireplaces were made of marble and alabaster, the drawing room was richly decorated and the ceiling painted with medallions of Roman Emperors and classical scenes. No expense was spared in fitting the mansion with exquisite furniture and fittings.

When everything was ready and as the Larios family prepared to move in, and official announcement was made to the effect that the Duke of Connaught, Queen Victoria’s son, was arriving at Gibraltar on a staff appointment. Pablo Antonio lost no time in offering the Duke his newly refurbished property, to use as his residence during his stay in Gibraltar, an offer that was readily accepted. After the Duke’s departure, the Larios family enjoyed their property and the house was known for a long time as “Connaught House”.

Pablo Antonio was so identified with Gibraltar, that he christened his five sons – Carlos, Augusto, Leopoldo, Pablo and Ernesto, their initials forming the name CALPE.

His son Pablo inherited the house. In 1920, financial difficulties forced Pablo to sell the property to the Colonial Government. In 1924, the property became home to the newly formed City Council. The Council was dissolved in 1969, since when, the Council Chamber has been used for the Mayor’s civic receptions.

Some landmarks in the history of the Gibraltar City Hall 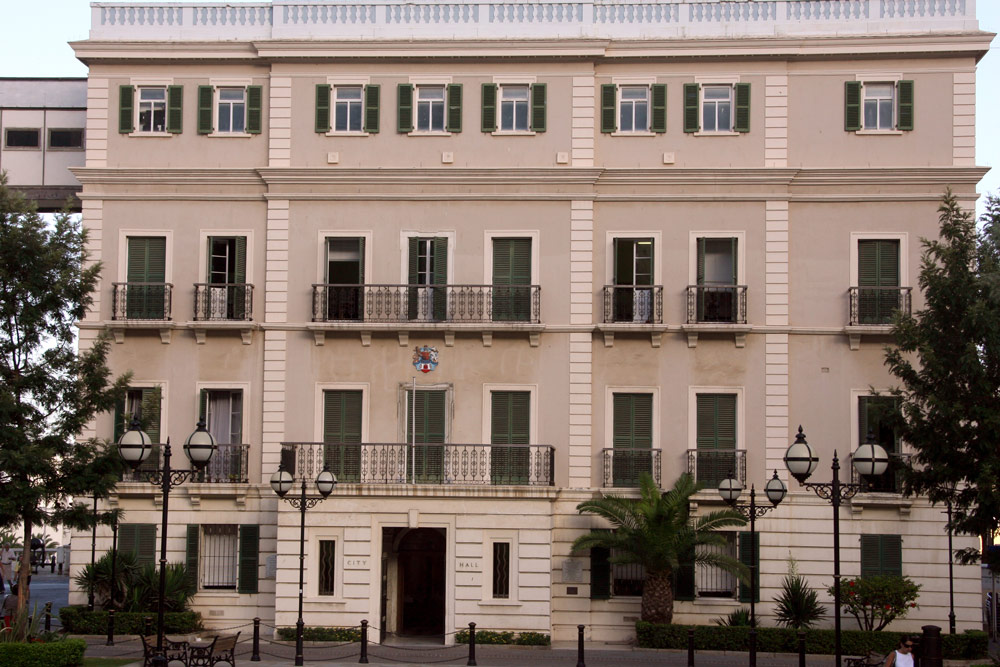 The restoration of the Council Chamber & the Mayor’s Parlour

After the successful restoration of the City Hall’s faced in 1996, the Mayor’s Office and Parlour were earmarked for restoration. Thanks to Jack & Dorothy Ellicott’s book on the history of the City Hall, we have a detailed description of its elegance.

“The saloon had its walls and ceiling painted grey, embellished with artistically executed paintings in fresco of classical subjects. Gold leaf picked out details of relief on the walls, dado and ceiling, from which medallions of Roman Emperors looked down where the ceiling was insufficiently ornate for Victorian taste, the artist simulated raised work with cleverly painted shadows.

The windows were hung with magnificent yellow satin curtains, lined with white silk, in keeping with furniture covered with brocaded satin of the same colour. Mirrors and cabinets of a costly character and a soft pile carpet completed the effect.

Leading from all this splendour the small drawing room, now the Chairman’s office, was given painted cupids on the ceiling, and housed a grand piano. Next came the dining room, in shape just what a dining room should be. A massive richly carved sideboard formed the principal feature of the room, which also contained a fireplace of carved alabaster. These three rooms looked on the Commercial Square.” The saloon, converted into the Council Chamber, had deteriorated over the years. Water had seeped through, cracked the walls and severely damaged some of the wall paintings. Several coats of green paint had defaced the walls and the original gold leaf had all but disappeared. It was clear that the restoration required an expert hand.

The services of an expert restorer from Cadiz, Don Francisco Fernandez-Trujillo were obtained who, with his son Pablo, made the perfect team.

The walls and ceiling were painstakingly and laboriously prepared, cleaned and plastered, before starting the restoration work with specialised paints and gold leaf. Each stage of the restoration work was photographed to document the progress. Work started in March 1999 and was completed in February 2000. Thus a unique example of our Heritage was rescued from decay and restored to its former glory.

The original Council armchairs have been treated for woodworm and re-upholstered. Three new Empire-style consoled and two large mirrors purchased and new curtains have been fitted. The decoration of the saloon, now known as the Council Chamber, is a wonderful example of Empire Style and includes many Neo classical features. The ceiling appears as being supported by a series of pilasters, the tops of which are decorated in a composite style of Ionic and Corinthian orders of architecture. We see four pictures depicting events in the history of Ancient Rome. The artist is an exceptional master of the trompe l’oeil technique of creating the impression of bas-relief images inlaid in the plaster ceiling. This is seen to best effect when the sun is just peeping over the Rock, all the shadows being orientated for this time of day. The layout of the ceiling paintings and the medallions featuring four Roman emperors is perfectly symmetrical. It is clear that the composition of the paintings has been taken from classical works by the great masters. We see the influence of David, Tiepolo, Bussano, and Rubens but most especially from Poussin, which the original artist has incorporated into the ceiling design in his own style. Over the years all trace of the artist’s identity has been lost. 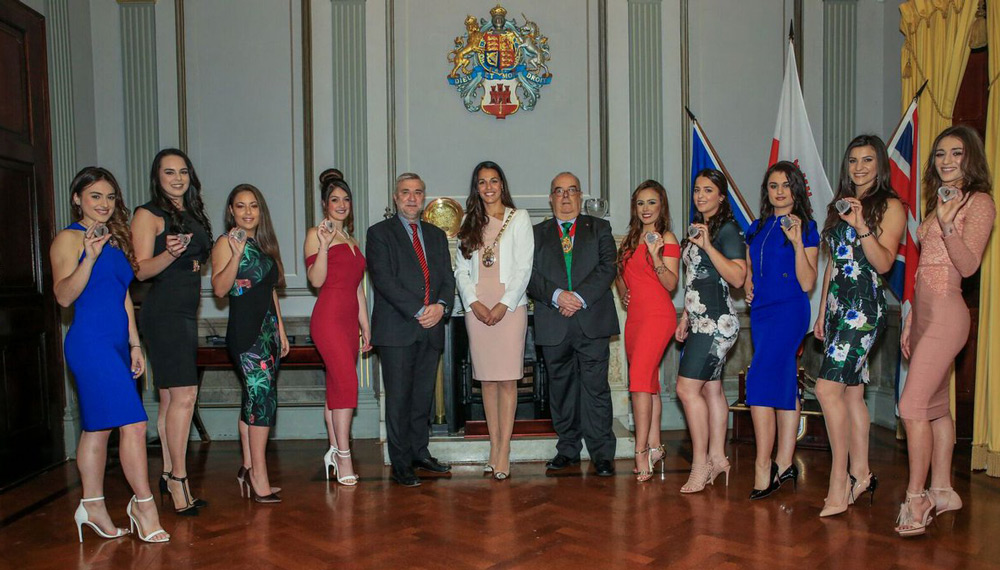 The ceiling of the Mayor’s Parlour was also richly decorated but in a softer style featuring floral motifs and cherubs. The original wall paintings have been lost. In keeping with the surviving floral theme of the ceiling decorations, these lost paintings have been replaced by new images of flowers indigenous to Gibraltar painted in the same style.